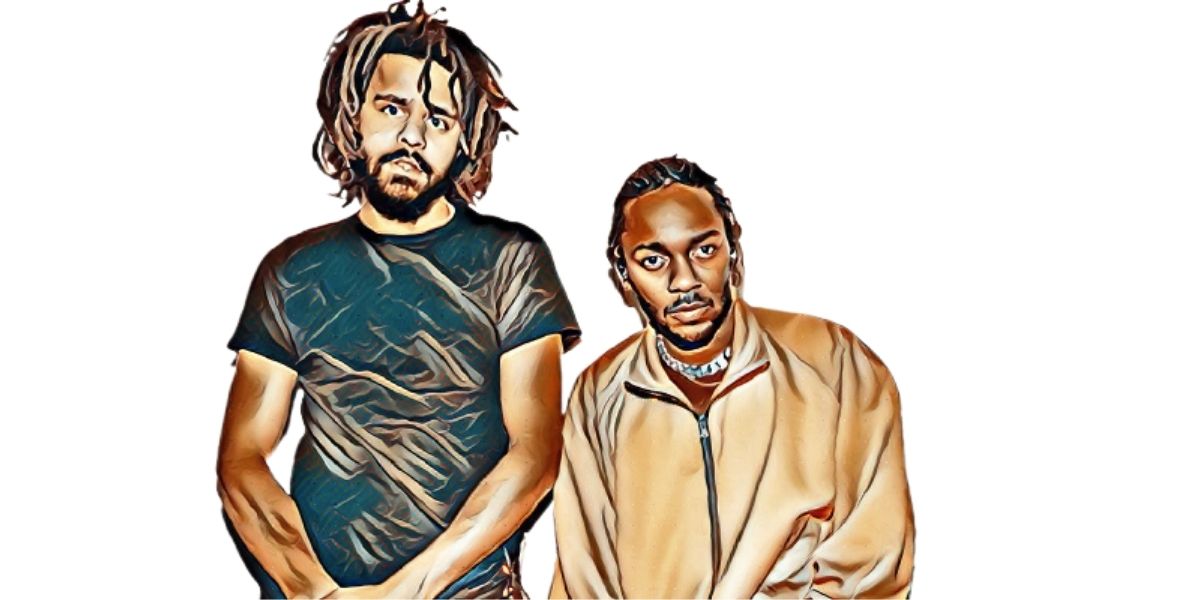 Rap music has seen its fair share of one-hit wonders, clout chasers and failed careers. However, Kendrick Lamar and J. Cole have established themselves as the most seasoned rappers in the industry.

Kendrick and Cole are arguably the modern-day Jay-Z and Nas, or Big Daddy and Rakim- two talents that existed at the same time.

This could have you wondering whether they had beef like their predecessors.

Let’s take a look at their career and whether they are friends!

Cole and Lamar met in Los Angeles in 2010. They were at an album listening event for U-N-I, a rap group.

This concert was the first time Cole heard Kenny’s ‘sic’ rhymes. Cole reminisced, “As soon as he started rapping, I’m like ‘What the fuck?’ This nigga’s hungry. Hungry.’ You know what I mean… So, as soon as it’s over, I’m the type of person if I’m feeling something, if I feel a certain way, I’m gonna let you know immediately.”

Yet, they have crossed paths on many occasions, sharing stages on tour and collaborating on tracks.

Additionally, Lamar and Cole have been touting a new album that will break the internet when it comes out.

However, the release date isn’t certain, as they’ve been teasing it for the past decade.

The Studio Link Up

Kendrick and Cole linked up in the studio after their meeting for the U-N-I album listening in 2010. According to sources, the link-up was very successful.

What they did in the studio was later labelled “top-secret shit. ”

Later that December, Kendrick admitted that he has a lot of music with Cole.

However, no one has ever asserted the veracity of this statement.

In another interview, Lamar said of working with Cole, “We don’t have a title or release date yet but J. Cole got like 90 percent of the production so far. One of my favorite songs of the project is a song called ‘Shock the World,’ Cole laid the first verse and set the tone for the whole record. It’s going to shake up a lot of people.”

In February 2011, hip hop fans were treated to a Cole – Lamar album leak. The track called Temptation that leaked to the internet featured Javonte.

However, the song was never officially released.

In May the same year, another Kendrick and Cole collabo leaked. The track is called shock the world and features BJ The Chicago Kid.

The song involved slow burns with the rappers jamming to their pre-fame days.

Their Album is on Hold

Come June 2011, Kendrick revealed that their join album was put on hold to allow the rappers to focus on their careers.

“It’s still moving, we just getting the music right,” Lamar stated. “[Cole] got a situation with his album coming out, his single. I got my situation coming out. We just really wanted to focus on that. Especially me just coming off the XXL [Freshman cover].”

J. Cole and Kendrick Lamar never had beef. In fact, the rappers have been close friends since they made their rap debuts.

“That’s my man first and foremost, and I just feel proud because I seen it,” Jermain said about K. Dot back then. “I tried to tell people early, and I never really even stamped nobody before. And before my album was even out, before he even had a deal, I was making sure to stamp him.”

Jay Cole on his relationships with Lamar

After releasing his new album, The Off-Season, Cole had some exciting things about his fellow rappers.

His interview was explicitly aimed at Kendrick Lamar and Drake. In the interview, he categorically insisted that his relationship with Drake and Lamar has improved dramatically.

He no longer sees them as competitors but rather as friends in the same industry.

“These are the guys that push you, and you gotta push them,” Cole said. “I was so competitive early on that, like, even though we were all friends, I’ve never been a reach out, I’ve never been that person, especially when it’s competition involved. It’s almost like working out together.”

Well, there you have it. While the entertainment industry is highly competitive, some rappers still prefer friendship.