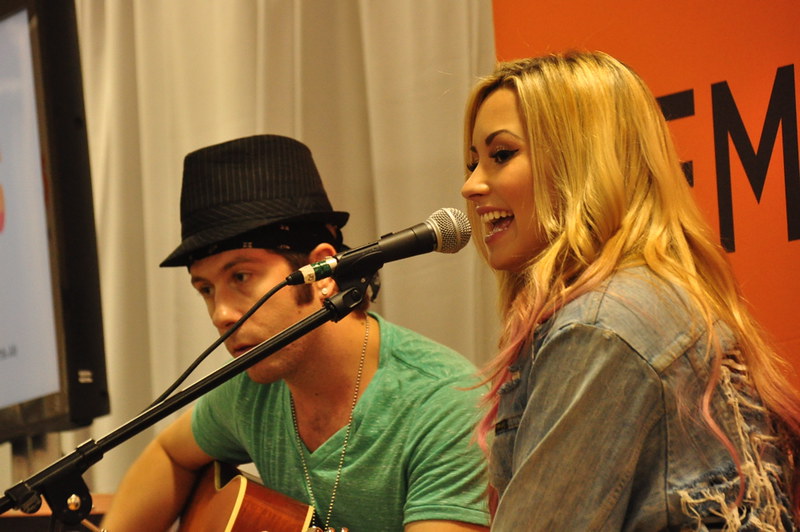 When such a popular singer like Demi Lovato sings so well in Spanish, and it’s just normal for the world to wonder whether she is Latina or not?

Demi Lovato is Latina with Mexican ancestry through her father.

She was born in Albuquerque, New Mexico.

Does She Speak Spanish?

No, Demi Lovato does not speak Spanish.

When asked about her Spanish skills, she admitted that she is not fluent but still loves to sing in Spanish. She says her Spanish songs help her to represent the sassiness of a Latin woman.

Although she does not speak Spanish fluently, her fans are still impressed with her cute Hispanic accent and her bilingual vocal skills on the track.

Demi is half Mexican as her father, Patrick Lovato was of Mexican descent, and her mother of English and Irish ancestry.

Patrick Lovato’s father had both a Spanish and Native American. His family has lived in New Mexico for generations, and it is also where Demi was born.

After a recent DNA test, Demi Lovato revealed that she is Spanish, Native American, British/ Irish, Scandinavia, and African.

She was so enthusiastic about sharing this tweet but was criticized for her excitement of being 1% African.

In a red carpet interview, Demi admitted that she was not Mexican. However, Mexican just a nationality and not a race.

Most Mexicans usually have Spanish and Native American roots. Since her father is of Mexican ancestry, then she is indeed of Mexican descent too.

Despite having a Latin background, Demi admits that she didn’t understand the meaning of being Latina.  Growing up in America and didn’t look Hispanic, but white is one reason she never appreciated her culture.  Also, her complicated relationship with her father made it difficult to understand her roots and culture.

Her Latina genetics gave her a curvy figure, and she has been worrying about how her body looks. Demi has come to understand that in Latina culture, it is beautiful. In an interview with glam Belleza magazine, Demi says, “I no longer look at my body and think, oh my gosh, I have such a fat butt, or, I hate my thighs. On some days, I don’t love them, but that’s one of the things that makes me, me.” ” Hispanic culture celebrates curvy and healthy looks. Demi admits to being thankful for her Latin background.

The singer’s full name is Demetria Devonne Lovato.  This explains why she preferred to shorten her name as fans would have a mouthful to say.

She was Homeschooled after 7th Grade.

Demi had difficult times in school as she was being bullied. Therefore, she was homeschooled after 7th Grade. Her classmates picked on her due to her weight and called her names. To get out of such toxicity, she had to turn to alternative schooling.

She is allergic to cats

Most people are obsessed with cats, but Demi avoids cats at all costs. Any interaction with cats causes her face to swell. She tried adopting a hairless cat, but she still got the same effect and ended up returning the cat.

Lovato has struggled with addiction to cocaine, marijuana, and Adderall.  She has been admitted to rehab severally, and at one point, she was revived in her home after overdosing.

Although she has been through difficulties when battling addiction, her net worth is currently $40 million. Much of her earnings come from her singing career.