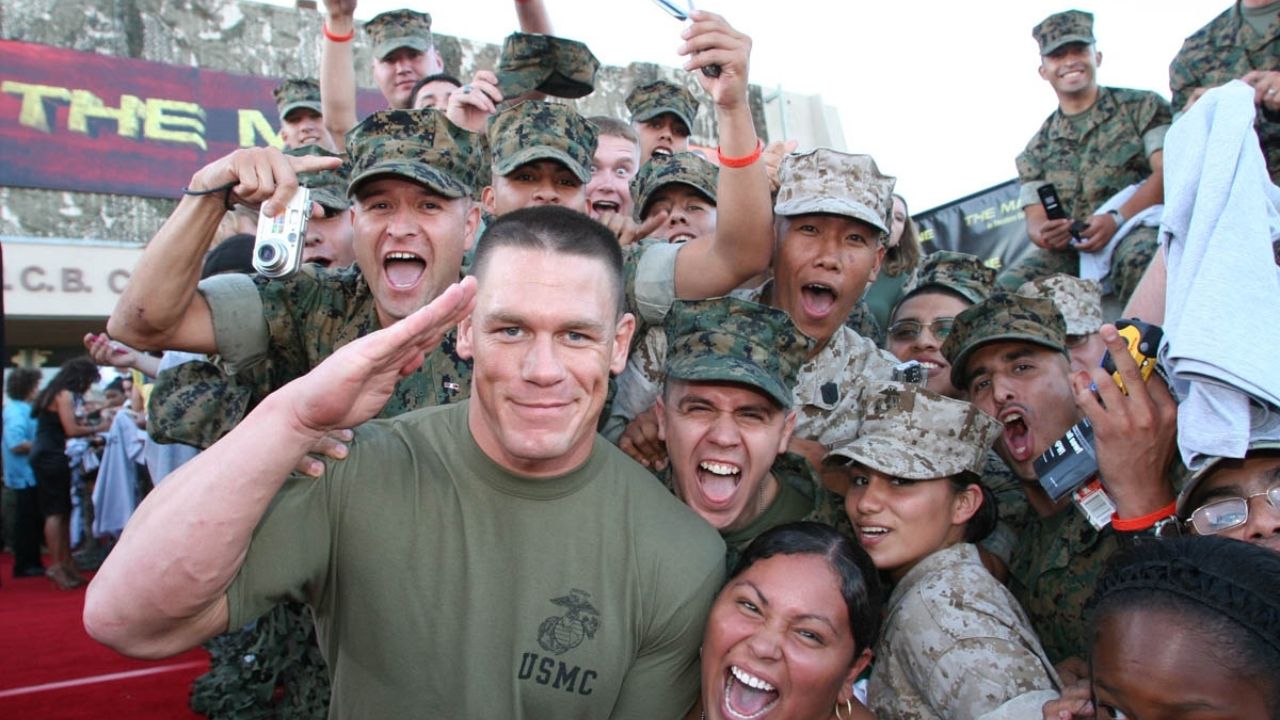 When you think of the most iconic wrestlers in the last 25 years, John Cena’s name will not miss from the list.

He is, without a doubt, the most popular and admired wrestler in the last decade.

Being a popular figure globally, many questions have been asked about him, as people try to dig into his past before his wrestling career.

One question that keeps popping up is whether he once served in the army.

Was John Cena in the Army, was he in the marine corps?

Was John Cena In The Military?

Having starred in The Marine movie and makes a perfect salute, one would think that John Cena was once in the army but he has never served in the military.

Before he began his professional wrestling career2000, he worked as a driver and had thought of becoming a professional bodybuilder.

Which branch would he join if he went to the military?

John Cena has shown his different versions in the past two decades, a wrestler, an actor, rapper, reality TV star, and the list continues, but never US marine.

However, he once talked about the branch he would serve if he went to the army.

When asked in an interview by Task Purpose whether he has ever considered joining the military, Cena said it once crossed his mind.

He fell into the world of sports and entertainment “by accident.”

At 22, Cena said he got to the point where he wanted to make a career out of his life. He thought about enlisting in the Marines.

His thought faded away during that weekend when a friend came to the gym and asked him whether he ever thought of wrestling. He has never looked back again.

Why is He Associated With Ever Serving In The Military?

In late 2004, Cena made an intentional and fictitious disappearance out of WWE TV for one month.

The real reason behind scripting his disappearance was that he was starring in the WWE Studios movie “The Marine,” which was the first WWE movie to star its wrestling talent.

After the movie was officially released, the fans saw a changed person in John Cena. He started wrestling in Green camouflage shorts and wore dog tags.

Cena once admitted that the dog tags carry meaning to him but have never revealed their origin.

“It’s a salute for loyalty to those that stand by me, that have been doing it for years.”

There you have it. He explained that it is just a sign of respect for both his fans and men in uniforms.

Cena has also formed a close relationship with several Armed men and has appeared in the WWE’s annual Tribute to the Troops show on a couple of occasions.

Where did he grow up

John Cena was born on April 23, 1977, and raised in Massachusetts. He later went to Springfield College, where he studied exercise physiology.

After his graduation, Cena left Massachusetts for California, where he started working as a bodybuilder.

At that point, he had $500 in his pocket and couldn’t afford to rent an apartment. He began cleaning toilets and folding towels at a gym to earn a living.

John Cena’s career did not grow overnight. It began in 2000 from a conversation he had with a friend who encouraged him to try wrestling in the years since Cena has won several titles. He also became the first wrestler ever to defeat Edward “Umaga” Fatu.