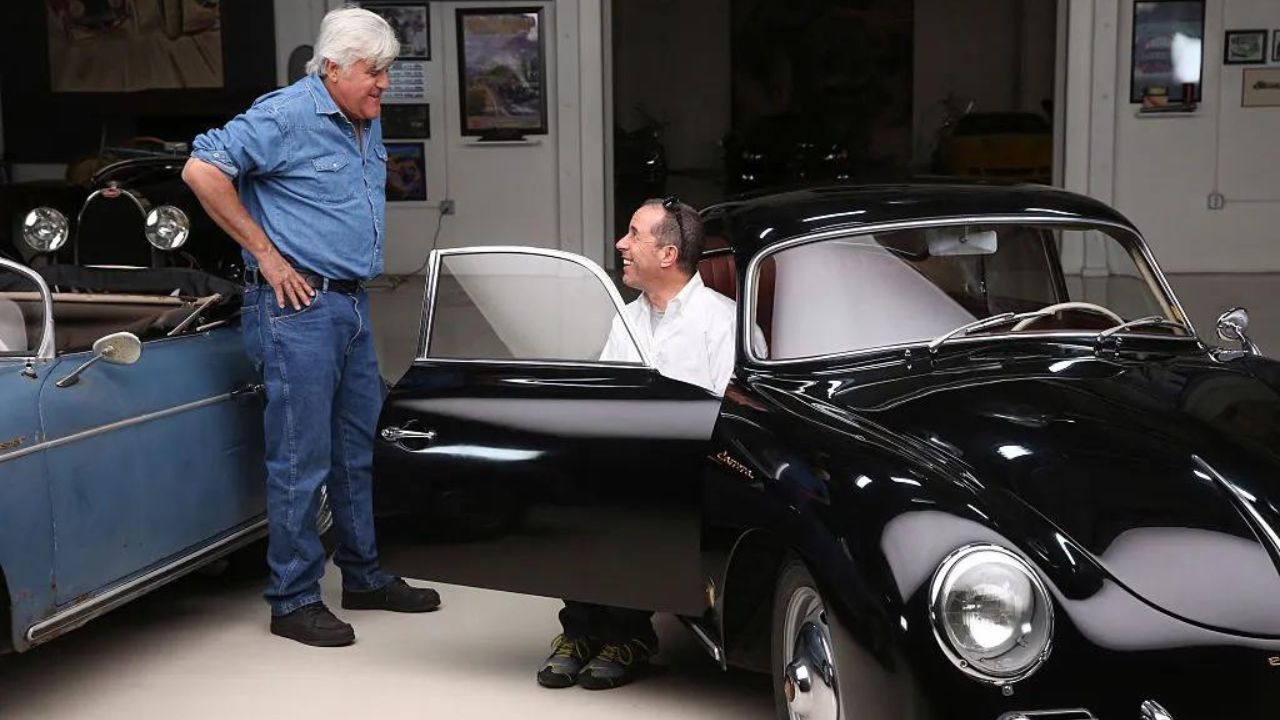 Other than his extraordinary acting and comic skills, one of the things that made Seinfeld extremely popular was his love for cars. This love is precisely what led Seinfeld to start a web series called ‘Comedians in Cars Getting Coffee.’

Jerry Seinfeld has 150 cars valued at $150M. He owns all the cars from his show

We are sure you have already guessed the premise of the series. Haven’t you?

Well, if you haven’t already, here you go. In the series, Seinfeld would pick up a fellow comedian in a different car for each episode, followed by some coffee and conversation.

If you still don’t believe in Seinfeld’s love for cars, hear us out. The show called ‘Chasing Classic Cars’ on Discovery Channel claimed that Jerry Seinfeld is the owner of the first and last produced air-cooled Porsche 911s.

So, what is it with Seinfeld and cars? How many cars does he have? Is there something unique about his car collection?

Today, you will find out everything you’ve got to know about Jerry Seinfeld’s love for cars and his entire collection.

How Many Cars Does Jay Leno Have?

How Many Cars Does Jerry Seinfeld Have in 2022?

Jerry Seinfeld owns a total of 150 cars which includes an extensive Porsche collection!

These cars are valued between $50 million to $150 million.

Where Does Jerry keep his cars?

Well, he keeps them tucked in an enormous $1.4 million-dollar underground garage in Manhattan. Seinfeld is not known to discriminate between cars.

So, he collects all kinds of automobiles – limited edition rides, brand new cars, and even vintage classic cars that are a rare sight today.

Has Jerry Seinfeld Ever Parted Ways with Any of His Cars?

Seinfeld knows two things really well: comedy and automobiles. He certainly loves his cars a lot. But love for automobiles does not mean that Jerry won’t part with his cars – especially if selling one gives him the chance to buy another.

In 2016, Seinfeld put up some of his vehicles for auction. Surprising, isn’t it?

Well, believe it or not, Seinfeld bid farewell to 18 cars from his valuable and much-loved automobile collection.

These 18 cars were inclusive of 16 Porsches and 2 Volkswagens.

Wondering how much were these cars sold for?

What Is It with Seinfeld and Porsches?

If Seinfeld could forever keep a carmaker with himself, it has to be Porsche. At one point in time, Seinfeld had 46 Porsches at once.

This fleet of cars included several rare models like the first 911 Porsche produced in 1963.

So, what is it that Seinfeld adores about Porsche? According to CNBC, Seinfeld is in love with Porsche’s ability to be minimalistic yet perfect. Jerry says that there are no stupid lines on a Porsche that don’t make sense.

RECOMMENDED: How Many Cars Does Ronaldo Have?

Be that as it may, you can tell a car connoisseur when you see one. Jerry praises Porsche for being efficiently refined and robust aerodynamics. In Seinfeld’s words, a Porsche is “the essence of sports-car perfection.”

What’s Up with Seinfeld and Comedians in Cars Getting Coffee?

If you haven’t already connected the dots, hear us out. Jerry Seinfeld came up with the idea of Comedians in Cars Getting Coffee while he was picking up a Volkswagen to add to his enormous car collection.

In an interview with Huffington Post, Seinfeld revealed that he was driving back from Albuquerque with a friend after picking up a Volkswagen Bug. The two friends videotaped themselves on this drive.

And voila! Shortly after, Comedians in Cars Getting Coffee was born! The show has nine seasons so far. Many impressive guests like Jim Carrey, Sarah Silverman, Tina Fey, and President Obama have been a part of this show.

Which Car Will Seinfeld Never Buy?

As we mentioned before, Seinfeld does not discriminate between automobiles. However, he does not show fondness towards Lexus.

So, why does Seinfeld not appreciate the idea of a Lexus? Why will Seinfeld never add a Lexus to his collection?

Well, Seinfeld feels that Lexus has only “perfected the idea of a coffin on wheels.” He even admitted that the Lexus vehicles make him angry and very upset.

Jerry Seinfeld is truly and undoubtedly obsessed with cars. Seinfeld has spent his entire life perfecting his massive collection of cars. So, along with comedy, his love for automobiles makes Seinfeld a favorite of many.

Seinfeld initially believed that he might end up writing for car magazines because he “always had a car thing” and was car crazy ever since he was nine years old. We hope this article has given you an insight into the second-best thing that Jerry Seinfeld does!