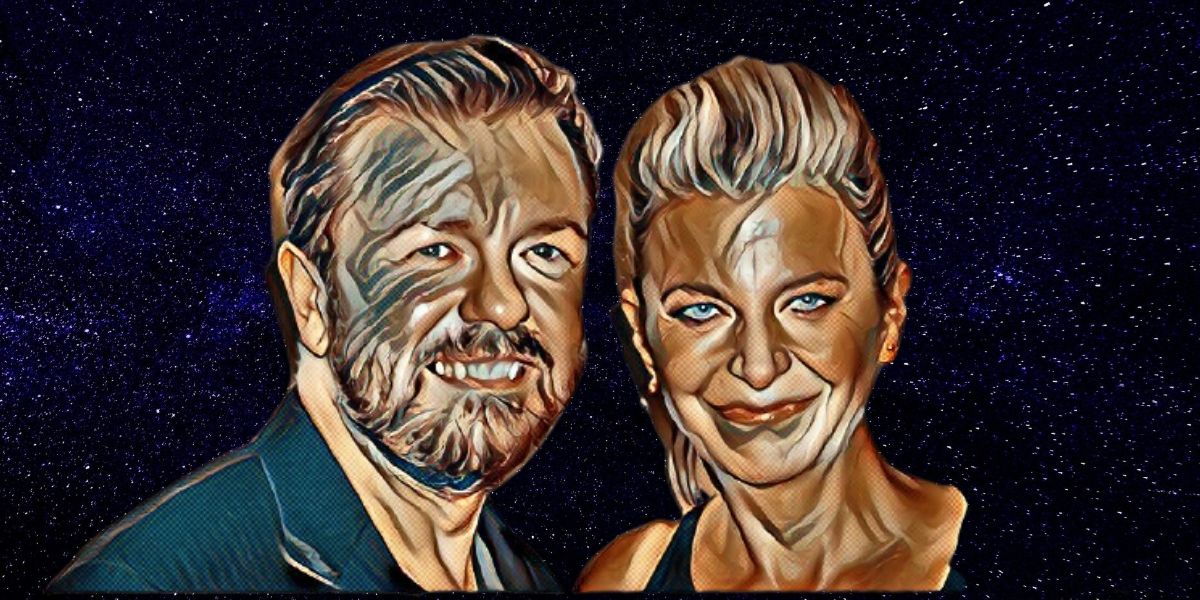 Ricky Gervais and Jane Fallon have been together for almost four decades. Gervais’ long intimacy with Jane Fallon has subsisted through their lives as young people and as they graduated into fame.

Ricky made his fortune in acting while Jane made it big as an author.

However, their colossal wealth has never been a reason to live large. They live a relatively normal life, far from conventional celeb status and glamour.

The duo is in their 60s, and they met while still studying at the University College London in the 1980s.

Yet, the real question is, how did they meet? Stay tuned to find out more!

Ricky and Jane attended the University College London in the 1980s. They lived in the same flat above a brothel with all manner of uncouth activities.

When talking to Loose Women, Jane said: “We went through a good few years when we had no money, and I’ve talked about this before – the brothel we lived above in Kings Cross – I always knew I had a plan to build up a career and I think once you do that it does mean a lot more because you’ve worked for all of it. ”

According to the bestselling author, she had many Saturday jobs, and she worked in several shops to make ends meet.

She was also a chambermaid in various hotels.

Since their times at UCL, their fortunes have changed drastically. The actor is worth a whopping $140 million, while Jane is worth $80 million.

Ricky has enjoyed huge success from The Office and After Life which were highly popular.

On the other hand, Jane is a multi-millionaire with several bestsellers, including Foursome, Got Your Back, and Getting Rid of Matthew.

The couple lives in a mansion with a summer house, a pool, and eight bedrooms in London. They also own another house in Marlow, Buckinghamshire.

However, the couple has never been concerned about their huge wealth. Speaking to Loose Women, she said, “I think apart from obviously I’m living in a beautiful house, I kind of tend to ignore it by and large because it is a strange thing to think about.”

Why they never got married

While their relationship has lasted a long time, they have always maintained that they will never get married.

In an interview with The Times, Ricky said, “We are married for all intents and purposes, everything’s shared, and actually our fake marriage has lasted longer than a real one. But there’s no point in us having an actual ceremony before the eyes of God because there is no God.”

The couple also ruled out having children.

How did Ricky Gervais and Jane Fallon Meet

The duo lives in Hampstead, but they met at UCL when Ricky studied philosophy. Fallone, a novelist and TV producer, studied history at UCL simultaneously, and they immediately began dating.

After completing college, the pair moved in together and co-habited since then. While they have dated for close to 40 years, they have remained committed, yet they aren’t married.

However, this has never been a concern for them.

“We are married in everything but the ceremony. We share everything, and everything is in both names. We’ve lived together for 29 years-how are we not married except in the eyes of God?”

Jane and Ricky also decided to forego parenthood. This question has been the subject of many questions from both their fans and the media.

Responding to The Nottingham Post in 2008, Fallon said, “It’s a difficult world, and you shouldn’t have kids unless you really want them.”

Ricky Gervais also responded to The Telegraph on the parenting decision admitting that “One good reason I don’t want [kids] is that I don’t think I’d sleep at night. Before this interview, I had to check twice that I hadn’t left the doors to the pool open because I was worried the cat would go through them and drown. So with a child, I’d just be stood over it, making sure it was still breathing.”

Regarding Ollie, their cat, Gervais noted that the pet was not their kid. He told The Telegraph, “Well no. I’m not mental.”