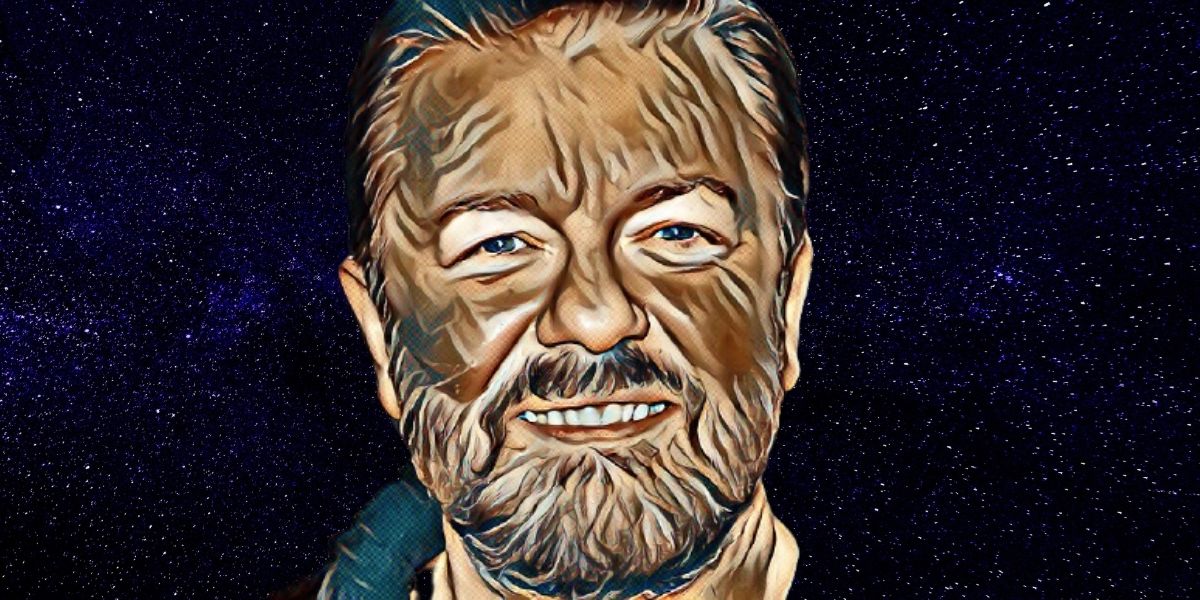 Ricky Gervais is a British actor, writer, filmmaker, and comedian with a net worth of $140 million.

The talented actor earned most of his fortunes from his show The Office. The Office started as a limited-run British show in 2001 before it was adapted to an American version in 2005.

To date, the show has over 201 episodes and over nine seasons.

It is no doubt that the American version of the show is a lucrative show in syndication history, and it has earned billions in fees and royalties.

Therefore, Gervais is a regular when payments from the show are made or when it is sold to other platforms.

Let’s find out more about Ricky Gervais’ early beginnings and how much he sold the show for!

Ricky Gervais was born Ricky Dene Gervais in June 1961 in Reading, England. He was the youngest of four siblings.

After his secondary school education, Gervais took on philosophy at the University College London, where he graduated with a degree in the same field.

While pursuing his university education, he met Jane Fallon, who he has dated since 1982.

At first, Ricky wanted to become a pop star. However, he didn’t attain this dream, and he opted for an entertainment career in radio.

As the head of speech at XFM, Ricky met Stephen Merchant, who took him up as an assistant.

The pair later went on to create The Office. Gervais’ television career began with writing sketches for The Sketch Show. He later appeared as an intentionally offensive and politically incorrect host in another show called The 11 O’Clock Show.

The idea for the show came up in 1999. Stephen Merchant had created a seven-minute short clip for a project for his studies.

The short skit featured David Bent, Ricky’s future role on The Office. Unexpectedly, the film ranked high among BBC employees, and they requested a pilot script from Merchant and Gervais.

The pair came up with the pilot script, and the show aired for the first time on BBC.

Initially, the show was a dud, and only six episodes were released. It didn’t have many fans either. However, people began buying The Office’s DVDs through recommendations by word of mouth.

With time, the BBC recognized the second season’s need, and they obliged.

By 2003, Merchant and Gervais were comedy masterminds with season two of The Office.

With this success in Britain, the show traversed borders into the United States. It has also been recreated in Sweden, Brazil, and France.

Ricky admitted that the praise received from the initial The Office in Britain motivated their success in other countries.

How Much Did Ricky Gervais Sell The Office for

To date, no one knows the exact figure Ricky Gervais sold The Office for. However, Gervais and Merchant have made millions of dollars from the show through creator and producer credits.

Gervais’ true windfall came due to the absolutely lucrative syndication and licensing deals The Office has been getting in recent years.

He owns about 10% of the show’s syndication equity points. This means that he earns 10% of any profits the show makes.

Ricky has easily grossed over $100 million in syndication sales with these earnings. However, this is before taxes.

In June 2019, NBC purchased the rights to air The Office beginning 2021 for about $500 million. Before this move, the show had been airing on Comedy Central, a Viacom-owned network.

The Office also featured on Netflix for a long time.

After immense success with The Office, Gervais had a hand in many other shows and TV series. The first show was Extras, a series with the big-name celebrities playing themselves in the fictional comedic film.

In 2010, the talented actor also created his own show, The Ricky Gervais Show. He also had a hand in creating Derek, Life’s Too Short, An Idiot Abroad, and After Life.

While most people don’t know it, Ricky was a successful stand-up comedian in the 1990s.

After The Office, he has had an extensively successful career as a stand-up comedian. You can find some of his comedy specials on Netflix.