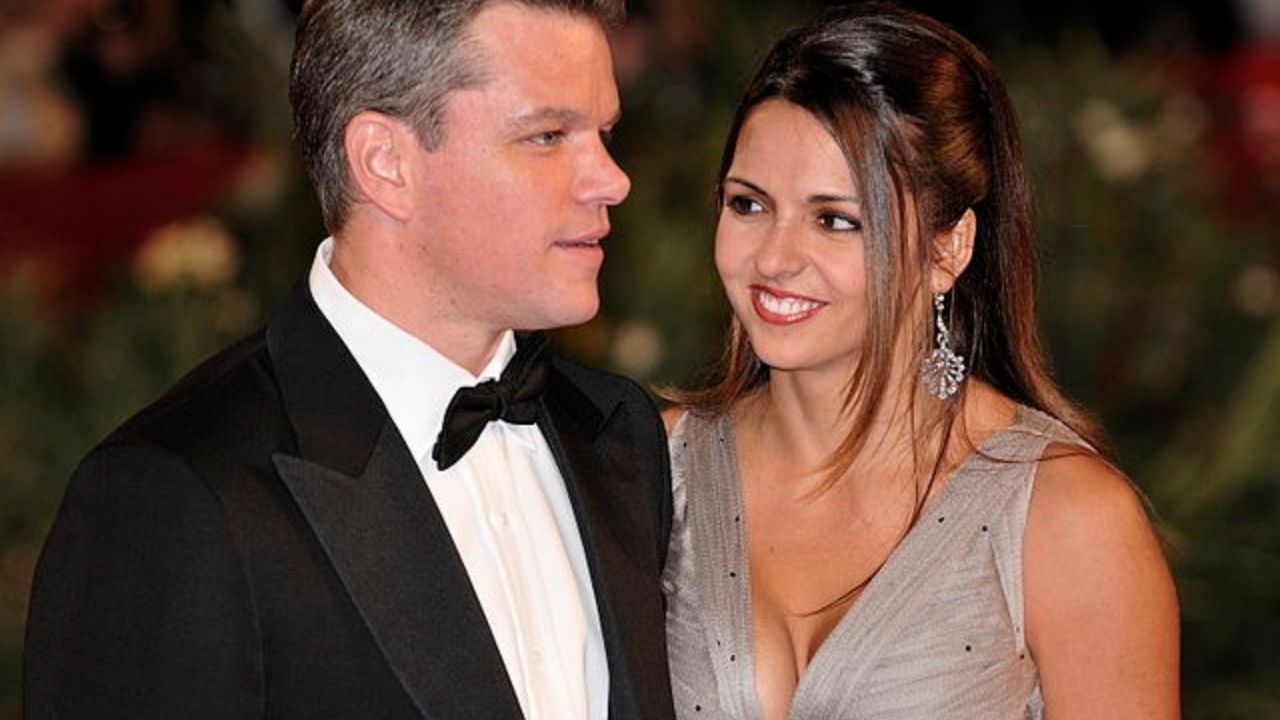 Matt Damon has been married to Luciana Barroso since 2005.

They have been living happily for the past 16 years, yet it’s so difficult to find any tabloid fodder on Barroso.

Now, most people know a lot about the Jason Bourne star, but very little about his significant other.

Well, it’s widely known that she likes to keep a low profile when it comes to her life and personal matters.

Let’s find out more about Damon and Barroso, how they met, and their marital relationship!

How Did Matt Damon and Luciana Barroso Meet

Matt Damon and Luciana Barroso met at a bar she was working in as he attempted to duck fans who had identified him.

Matt and Luciana had one of the most endearing romance stories in Hollywood.

Narrating to Vogue Australia, Barosso said that she met the star when she was bartending in Miami.

Matt and his crew came in for a drink while she was working. Barroso said, “Matt’s story is that he saw me across the room, and there was a light on me. And I’m like, ‘Yeah it was a nightclub—there were lights everywhere!’”

The actor then took refuge from his fans with her. “He had started getting recognized and asked for pictures and autographs, and then it got kind of aggressive because people are drinking and stuff, and so he came and hid behind my bar … [wanting to] just hang out back there and have a drink. He says, ‘Oh, I saw you and I really wanted to talk to you.’”

As he passed the time behind her counter, the former bartender put him up to the task of making drinks.

“You know, if you’re going to be back here, you can’t just be standing there!’” Luciana told her future husband. “He had trained as a bartender for a film years before, so he started making drinks. And he made me a ton of money in tips that night, because of course everyone wanted to go and see him.”

The couple has three children, Stella, Gia, and Isabella. In addition to these children, Luciana is the mother of Alexia Barroso from a previous marriage.

According to reports, Matt was drawn to Luciana because of her maternal instinct. After their encounter at the bar, the Oscar winner had invited Barroso for a drink, but she respectfully declined.

“I was like, ‘I can’t, I have a 4-year-old daughter, I’m not going anywhere,’ and that was one of the things he loved, that I had a daughter,” Luciana narrated. He said, ‘I love that you’re a mum, and that’s your priority.’”

Ten years after their initial marriage, the Hollywood couple renewed their vows in front of fifty friends and family.

According to sources privy to the couple, “It was a very family-oriented and happy celebration. Many guests brought their children (although Ben and Jen did not). After the ceremony, guests enjoyed an evening cocktail reception on the beach. Children were running around and playing with white parasols.”

Reports have it that the former bartender-cum-interior designer talked her husband into a tattoo date in 2013.

The couple then decided to put some ink on it in a gesture inspired by the late Heather Ledger.

Who Is Luciana Barroso?

Luciana Barroso draws her roots from overseas as she was born in Salta, Argentina. However, she didn’t grow up in Argentina as her Italian grandparents raised her.

Since she got married to Matt Damon, she took up the name Lucy Damon as her nickname. However, you won’t see any print media highlighting this name.

Luciana and Matt are neighbors with Chris and Elsa Hemsworth. Over time, Luciana has made strong ties with Chris’ wife, and the pair are practically BFFs.

Luciana’s friendship with Elsa is so strong that they decided to put it in ink. Elsa said, “We felt like we had to have something to remind us of those great moments we stayed together, and we decided to get a little tattoo [of three dots on their pinkies] altogether, and we say ‘We’ll have to do one every year,’”

She has been a flight attendant, a bartender, and an interior designer.