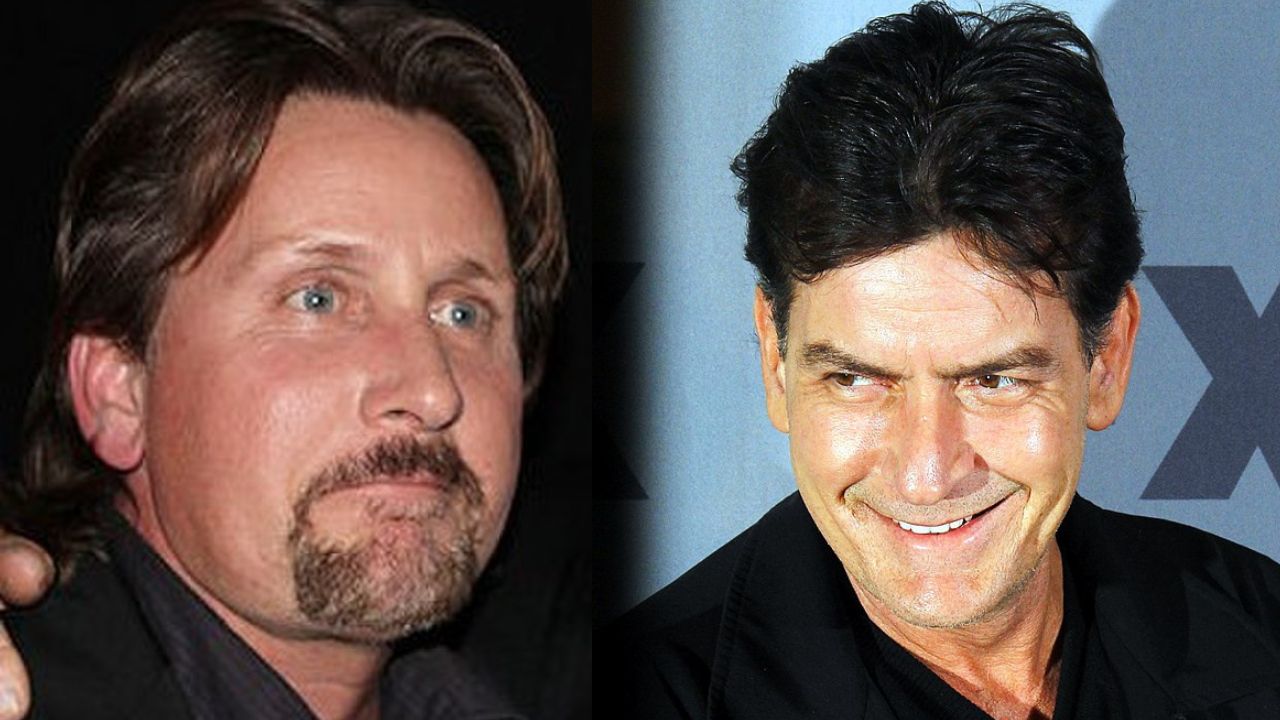 The relations under the Hollywood umbrella are often full of controversies.

One such controversy-loaded relationship is that of Charlie Sheen and Emilio Estevez. Both actors are sons of Martin Sheen, another reputed name in Hollywood, making them brothers but do they have the same mother?

Sheen and Ezteven have suffered many ups and downs in their relationship, especially in the 1980s and 1990s. These heartthrobs have many hidden secrets that make their relationship as brothers even more intriguing.

How are Charlie Sheen and Emilio Estevez related?

Charlie Sheen and Emilio Estevez are brothers, actually full brothers. They have the same mother and father.

The question arises because of the different family names the two actors carry.

Even though Sheen is the name you see used by the Hollywood royalty, their actual family name is Estevez.

The name Sheen was adopted as a stage name by the family.

The reason for the same was that Estevez did not have the striking appeal that an actor would want from their name.

Even though the entire family goes by the name Sheen, Emilio decided to keep the actual family name. The family didn’t welcome his decision and resisted it.

Despite knowing that using the name Sheen would have got his extraordinary work and fame because of his father, he felt the association was undeserved.

According to him, the fame and popularity that came with the name belonged to Sheen.

Sheen was earned by the hard work and efforts of his father and not him.

RECOMMENDED: What is Charlie Sheen Up To These Days?

The two brothers seemed to have a strong bond with their father. The relationship between Emilio and Martin became even stronger while they worked on ‘The Way’ together.

Emilio explained his father’s contrasting nature both on-screen and off-screen while the movie was in production.

It took him some effort to bring his father back into the character of Tom, which required breaking quite a few habits.

However, the relationship appeared good and healthy.

The two actors were blessed to be born into one of the hottest families Hollywood has ever seen.

With a magnificent career profile set by their father, Martin Sheen, the two actors had their entire future laid out for them.

Both actors have managed to earn similar fame and reputation for their exemplary performance in different movies and T.V. series.

Apart from all the glitter and gloss of Hollywood screens, the two actors have a struggling relationship.

The two brothers and the father, Martin Sheen, shared what can only be called the best friendship during the 1980s and 90s.

Charlie and Emilio stood alongside their father in his days of glory while he received awards for his exemplary performances.

In fact, the two actors themselves shared a friendly reputation and worked on stellar projects together.

However, Charlie Sheen started having a downward journey on the personal front, which greatly impacted his relationship with Emilio.

Their relationship has taken a hit, and they have distanced themselves from each other. The relationship saw a major downfall after Charlie divorced Denise Richards.

Charlie Sheen went on a path of drug abuse and alcoholism that led him to have HIV later.

In response to all the setbacks, Emilio moved away from a once inseparable brotherhood. But he still holds the same emotion of love for Charlie.

He started taking his sobriety seriously and working towards his health.

During all the personal struggles of Sheen, Emilio hasn’t shied away from admitting how proud he is of his brother’s accomplishments.

Furthermore, Eztevez hopes to work on a future project with his brother very soon.

A Brotherhood of Epic Hits

Even though the two brothers aren’t on the best terms at the present, they have delivered excellent projects in the past.

In their glory years of the 1980s and 90s, the two brothers ruled Hollywood alone as well as a duo.

With their father’s magnificent Hollywood career to be compared to, both the brothers managed to rise to the expectation.

They have proved to be the great products of Hollywood royalty, and there is no denying the same.

Some of their extraordinary work include:

The two actors have been lying low for a while now. They haven’t taken on any major projects recently.

After announcing the news of having HIV, Sheen has been focusing on maintaining his sobriety.

However, both the actors worked a lot in the prime of their life. It is simply the time to enjoy the fruits.