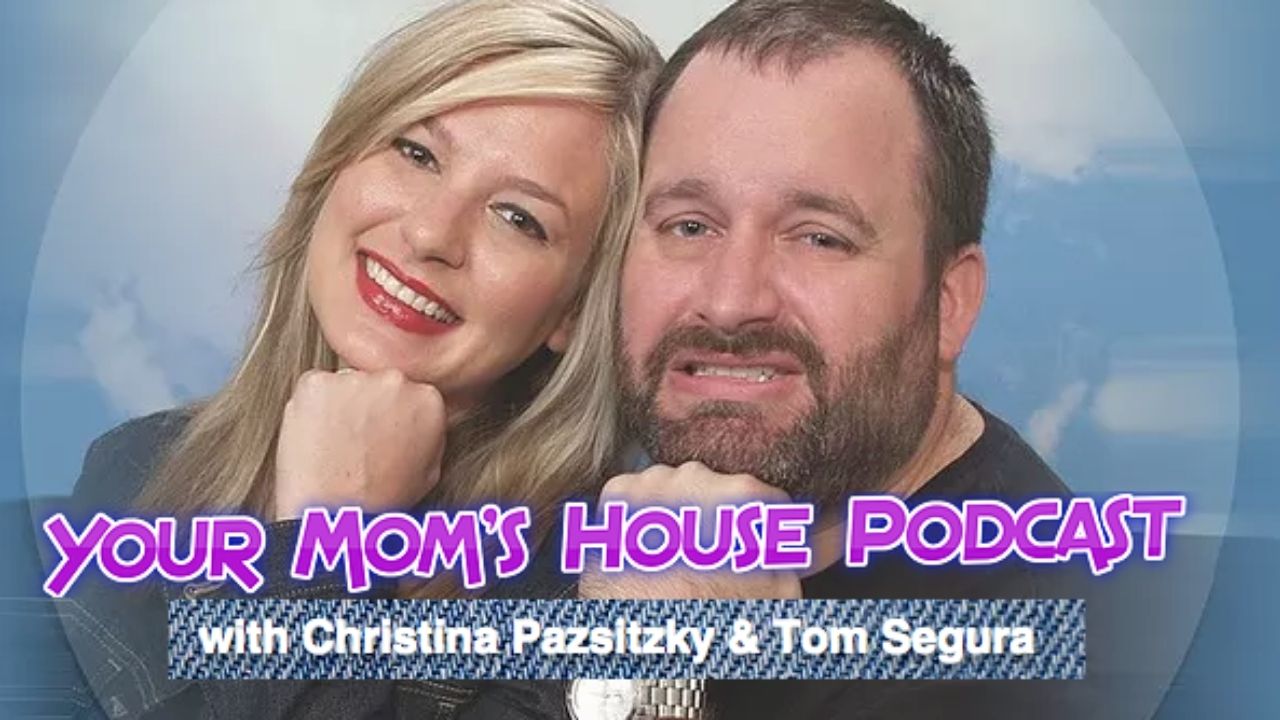 Thomas Weston Segura is an actor, stand-up comedian, author, podcaster, and writer. He co-hosts Your Mom’s House with his wife, Christina Pazsitzky, a comedian.

Tom Segura and Christina Pazsitzky’s relationship has led to a long-term marriage, lovely children, and the creation of a successful podcast, Your Mom’s House.

This bond has made them funnier as they increase their fans with the reality jokes that touch on their experiences regarding life, parenting, and marriage.

Even though they openly discuss their parenting experiences, they keep them hidden from the public.

The children provide a lot of content for the couple’s podcasts and stand-up shows.

Let us look at Tom Segura and Christina Pazsitzky’s relationship.

The 1990s Segura and Pazsitzky Met As Comics

Tom and his future wife met as comics, and they remained friends since Pazsitzjy was still in a relationship.

Christina and Segura met again, and they started a relationship this time.

At the time, their age difference was three years since Segura was 23 while Christina was 26.

The couple confessed they felt old when talking about how they met on their podcast.

2008 Christina and Tom Got Married

The couple tied the knot on November 2008.

They kept their children’s identities a secret and refrained from posting their pictures on social media, and this is despite always mentioning their parenting experiences on their podcasts.

2020 Christina Talked About Her First Awkward Experience as a Mother

Pazsitzky revealed that her first experience with motherhood was not what she expected.

In an interview, she talked about her birth experience with her first child.

She revealed they told her she would have a C-section, and they prepared accordingly.

She stated, “Because they were like, ‘The baby’s head is so big, and you’re so small.’

She said on the day of her planned delivery, she went into labor instead of having a C-section.

She added, “And I squeezed a human out of this tiny little fragile meow, and I had to have an episiotomy.

Oh yeah, for those of you who don’t know, they had to cut my taint — the area between my balls and my butthole.”

In October, Segura revealed that his children have great personalities.

This was while he was hosting the 2 Bears, 1 Cave podcast.

He recalled how his older child almost made his co-host drink toilet water.

He said he was a prankster and confessed his younger child also developed a habit of tricking people. In the same year, the couple moved to Austin.

They acquired a 6,200-square-foot mansion with five bedrooms and seven bathrooms.

The property is located in a gated community.

The amount of money the two spent on the property is unknown, but according to various listings, it was put up for sale at an asking price of $6.5 million.

They had sold their home at the Pacific Palisades for $7 million.