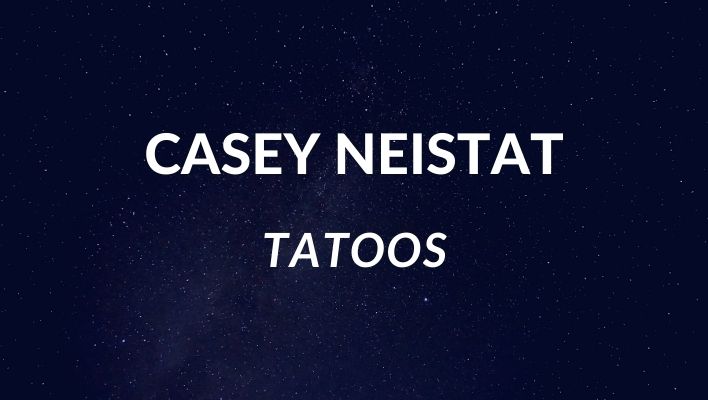 Undoubtedly tattoos are just a beautiful piece of art and creativity. Tattoos may be a form of symbolizing transformation, permanence, and beauty. Moreso, they are a medium of expressing one’s emotions or commemorating a particular incident. Therefore one should have a deep understanding before getting their tattoo done. Casey Neistat seems to have clarity on tattoos and has got a fantastic collection of tattoos!

Casey is one of the most popular YouTubers, filmmakers, directors, and producers.

His body is a collection of tattoos, and we are to explore them.

A man’s first tattoo in life always reminds him of something. Casey has his work harder tattoo on his left hand’s wrist. It is an inspirational art and reminder of the times he was a starter and did not have a single project for the whole year.

This one of Casey Neista’s most renowned tattoos. The tattoo lies on his right forearm. It is a source of inspiration to him and a constant reminder that he has to keep working hard and pursue things he is passionate about.

Casey got this tattoo while he was working on an Ad for the Nike fuel band. In this Ad, Casey did blow the budget by traveling the world, just showing what it means to Do More!

Casey Neistat is the real-life Maui. His fish bite tattoo proves the statement. Neistat praised a tiger fish that bit him in River Zambezi while visiting the devil’s pool with his son.

Case’s left forearm is inked ‘“ Always Be Closing,” a line any Alec Baldwin fan can remember from “ Glengarry Glen Ross” movie in 1992.

Neistat’s tattoo contains numbers and important numbers. For instance, Casey produced “The Neistat Brothers” show premiered on HBO on June 4, 2010.  He got the date inked in his left forearm to immortalize the moment. Under this tattoo also lies another  “5678”.

Among many of Casey’s tattoos lies an outline of New York.  A concrete jungle where dreams are made and achieved. Neistat decided to share the same story and create a brand for himself.

Tattoo from  a former Military Guy

Neistat is an emotional guy and just connects instantly with any individual. He got a tattoo named “Peony Flower” from a soldier, Roger, who turned out to be a tattoo artist.

This tattoo is huge with minimum shades done. The Peony Flower symbolizes the beauty of the transitional nature of our existence.

Each of  Neistat’s tattoos is unique and very raw. Experience and connection always matter to him more than the polishes and phenomenal artwork.

Csye has a tattoo representing marathon times and his records on his left thigh.

Although it looks like a kid crossing numbers to an extent, he confessed that it seems like somebody’s sketchbook.  However, Neistat loves to keep track of his marathon times on his skin.

Starting from a middle-class home, he certainly has a unique story to his way up.

His claim to fame is a Dirty Secret

Neistat, in 2003, created the video iPod’s Dirty Secret along with his older brother Van, a digital assault on Apple Ipod’s which was a relatively new product at the time. The video went viral, and Neistat became a star.

He had his own HBO show

Neistat is entirely self-taught when it comes to filmmaking, and this has not stopped his videos from having a professional level and look. His videos are impressive, and he already has 12.3M subscribers.