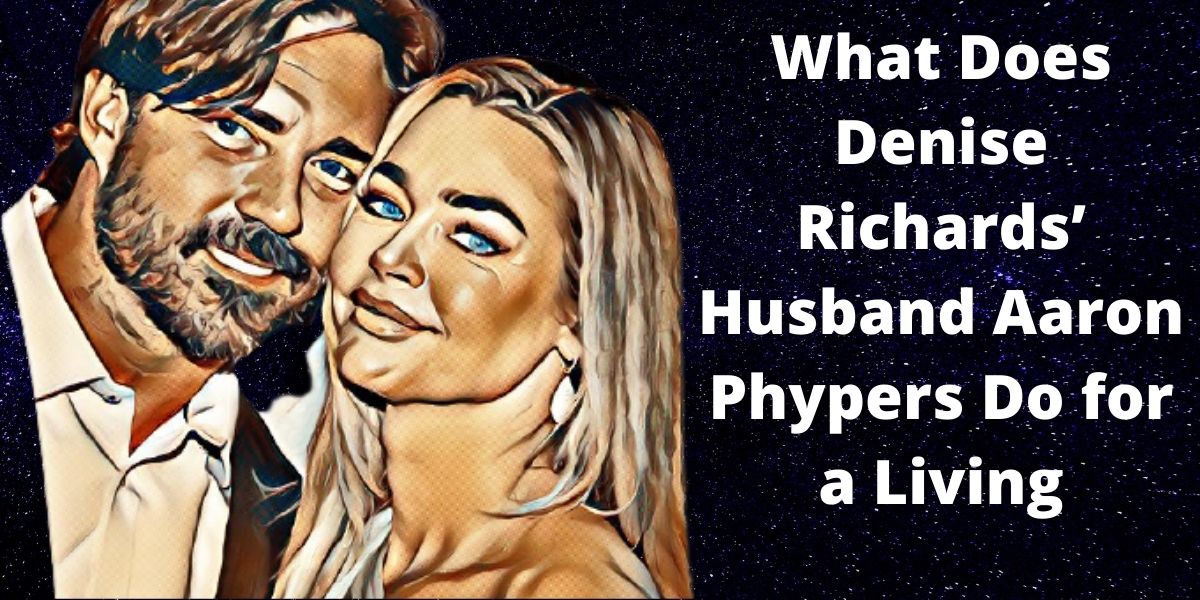 Denise Richards, 49 made her debut in reality TV in 2008, the same year she tied the knot with Aaron Phypers.

Before their marriage, Denise had been married to Charlie Sheen, the Two and a Half Men former star.

However, their acrimonious relationship ended in a bitter divorce in 2005.

Now many people might know Aaron Phypers, but not many know what he does.

Let’s find out more about him below!

Aaron Phypers is professionally known as Aaron Cameron at his Beverly Hills workplace.

He met Denise when she visited for frequency medicine in 2017.

Phypers is also the brains behind Q 360, a therapy center offering clients sound and light therapy.

Phypers’ career has been the subject of much criticism due to its uniqueness.

When Did Denise Richards and Aaron Phypers tie the knot

Aaron and Denise tied the knot in 2018. The couple married dating for about two years.

Eloise was a child born from Denise’s previous marriage with Charlie Sheen.

Controversy knocked on Denise’s door in 2020 when Brandi Glanville claimed they had an affair.

Since these allegations surfaced, The Real Housewives of Beverly Hills solely focused on Denise’s affair with her former castmate.

In her Instagram post, Glanville ignited the furore with a photo of her kissing Denise and left insinuating comments that indicated they were in a relationship.

Richards immediately denied the allegations and revealed to The Washington Post that “there’s definitely consistency with the subject matter that comes up on this Housewives season, and that’s all I’ll say. If I had an open marriage, I would be open about it,” Denise continued. She is also quoted saying that she would only appear for RHOBH’s season 3 “if it makes sense.”

What Does Denise Richards’ Husband Aaron Phypers Do for a Living

According to the Q 360 website: “Q in Q 360 stands for the Quantum Energy Field. This field is universal. It is the field where we all share an interconnectedness and an inter-relatedness. It is a field that both responds to consciousness and emits a universal field of conscious, informed, and intelligent energy. At the level of mind and spirit, Q 360 uses this field to create balance and health.”

“It all started with Aaron Cameron’s vision of creating a healing space using something as basic as frequencies. Physics has shown that everything vibrates, i.e., has a frequency. Starting over 25 years ago in Canada, he began using various frequency-generating devices to help people re-establish homeostasis and balance their body, mind, and spirit. Something miraculous happened — clients began to heal from all sorts of ailments — imbalances, just by being exposed to specific sets of frequencies.”

Denise also took to Instagram to cheer on her husband and all the hard work he does in his career.

In the touching post, the RHOBH star establishes herself as her husband’s cheerleader in his frequency medicine clinic.

Well, this might come as a surprise to many. Aaron and Denise met when they went to him seeking a frequency treatment.

“I was going to him to do preventative DNA repair,” the reality TV star said during the after-show. The pair ended up making love. “There were no clients there,” she concluded in the short clip.

Aaron and Denise didn’t take long to marry after their engagement news hit the airwaves.

Just two days after the news of their engagement, they tied the knot on September 8, 2018.

Of course, the family has had to deal with rumors that the RHOBH star cheated with castmate Brandi.

The actress stood firm in the face of the allegations, saying, “I have a very solid marriage and I — my husband and I, we just rise above it. You know, in the big picture, we can’t worry about that stuff.”