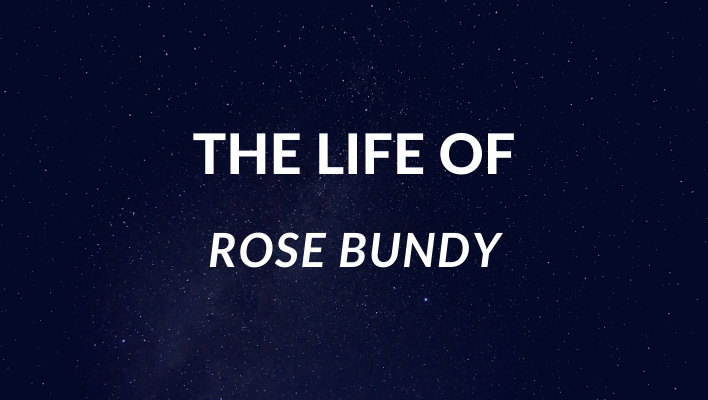 Everyone wants to be famous. However, for many, this is the worst life they could ask for. Imagine being the only child of a serial killer who showed no remorse as he murdered dozens of female victims in a long killing spree. Imagine being the child of one of the most infamous murderers in the world, Ted Bundy. Well, that is exactly who Rose Bundy is. Here is a brief overview of what we know about her.

Rose Bundy is the only surviving child of the criminal known as Ted Bundy. Theodore Robert Bundy, aka Ted Bundy, made a mark in the criminal history of the United States when he started his killing spree in the 1970s. After nearly a decade of denial, he finally admitted to the homicides he committed between 1974 and 1978. In his prime years, Ted Bundy had murdered a total of 30 innocent women who had no part in his life whatsoever.

Now think what the daughter of a man who murders women would have gone through after finding out why he was executed. Rose Bundy, also known as Rosa, has lived a quiet life for some time now with very little known about her, even though Ted Bundy’s family was the subject of extensive press coverage during the late 1970s.

Carole Ann Boone, Rose Bundy’s mother, met Ted Bundy while serving as an employee in the Department of Emergency Services in Olympia in the state of Washington. Rosa wasn’t born during her father’s killing spree that occurred from 1974 to 1978.

She was born in 1982, a whole 4 years after her father allegedly stopped his spree across multiple states.  It is said that Carole immediately fell for Ted when she first set her eyes on him. This was followed by regular dates, which eventually led to a relationship between the two.

After Bundy was accused of mass murder, he was tried in court. During his trial for the murder of sorority girls, Bundy did not have a legal defense team. In his trial, he defended himself, going as far as to call Boone to the stand as a witness in the case.

Boone often took Bundy’s side in court hearings, after which he eventually proposed to her. He still had not been sent to prison for any crime, and Boone was pregnant with Rosa. However, when he was eventually transferred to a prison, his wife relocated to a town just 40 miles away from her estranged husband.

The conception of Rose Bundy is a mystery to many. Conjugal visits were prohibited for prisoners sentenced to death, and Ted Bundy was on death row. The most popular theory is that during the 1980s, prisoners would pool up cash and bribe the guards for some alone time, which is how Bundy and Boone managed to meet.

While Rosa was Ted Bundy’s child, she did not interact with her father as much as people assume. Rosa was a distant girl who did not like the spotlight. She was conceived after her father had been sentenced.

Bundy’s case in Florida drew international press coverage, and the birth of his only biological daughter was fuel to the fire. The media was in a frenzy. The general public, however, did not consider Rosa as associated with her father in any way other than by blood.

Ted Bundy was executed in 1989 for his crimes. Boone and Ted Bundy had split in 1986, after which Boone had taken Rosa away and went off the grid. To this day, very little is known about Rose Bundy, which is very understandable. Today, Rosa would be a little over 38 years old, and no person would like to be associated with a serial killer, even if the crimes committed predated their birth.

There are rumors that Rosa grew up to become an intelligent girl who was at the top of her class. People close to the family say that they have been discrete about their conditions and whereabouts in order to maintain their privacy.

At the end of the day, Rosa earned her right to a normal life. If her mother had not taken her out of the picture, Rosa would have been overwhelmed by press coverage, ruining her chances of living like a regular person. All we can hope for is that Rosa grew up to become a good person who has a positive effect on people.