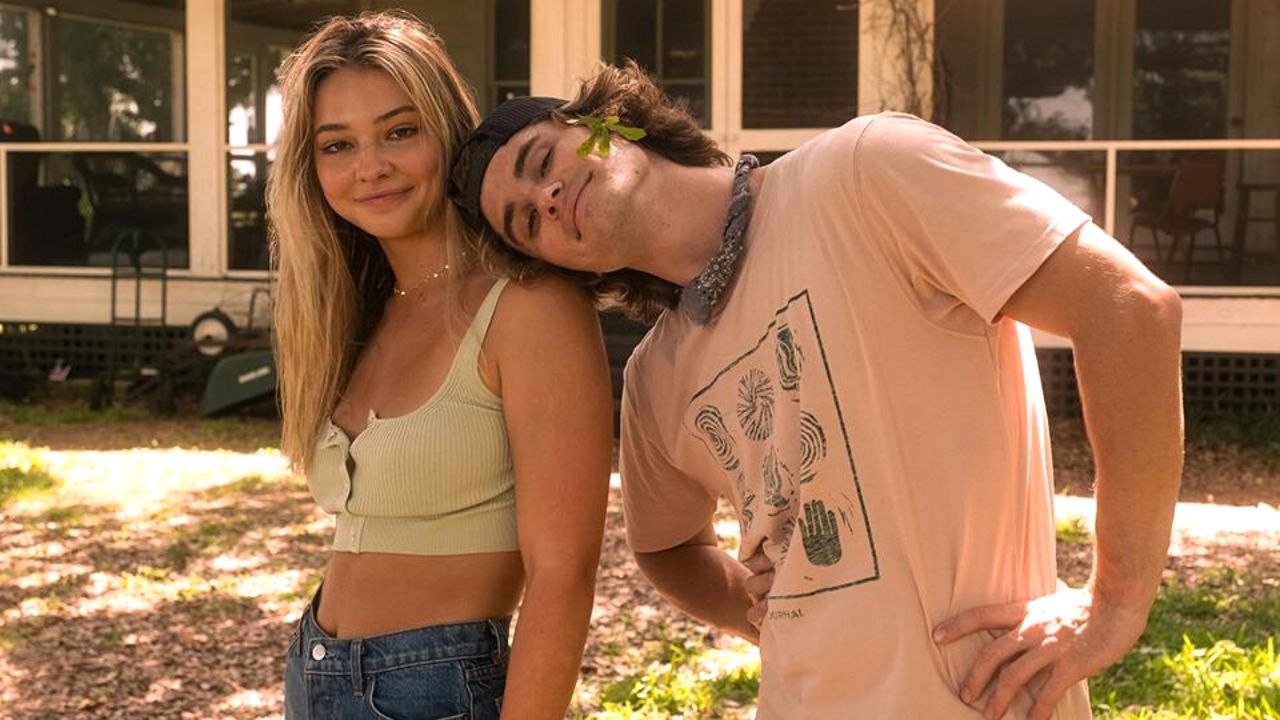 Madelyn Cline and Chase Stokes are one of those couples that are romantically involved both on and off-screen.

They are best known for their roles in “Outer Banks” and it’s exactly where they first met.

While the chemistry was there from the beginning, the two haven’t really started seeing each other romantically until Covid-19 quarantines took place.

In this article, we will take a look at their exact relationship timeline and check out what they’ve been up to.

There is no doubt that Madelyn and Chase are currently one of the cutest Hollywood couples, but let’s check out exactly how their relationship progressed over time.

Rumors about these two dating started in April 2020 when they were both spotted spending time in the same flat.

Madelyn later stated that they were all quarantined together, both she and Chase with other “Outer Banks” colleagues such as Drew Starkey and Rudy Pankow.

Chase posted a picture of him and Madelyn casually enjoying a day on the beach. This followed with another picture – only Madelyn was on it this time.

“Cats outta the bag,” was Chase’s caption. On which Madelyn commented, “I’ve fallen, and I can’t get up.”

Celebrating Stokes’s birthday, Madelyn posted a couple of exclusive pictures of them together on Instagram.

Just a few days later, Madelyn and Chase had yet another joint work project as they both appeared in the Kygo’s remix of the hit 1979 song “Hot Stuff.”

As the title of the song already suggested, the music video was full of hot scenes.

In an interview with Entertainment Tonight, Madelyn had a couple of words regarding her relationship with Chase.

“I feel amazing. Our love is true. I feel very blessed at the moment because I have someone by my side to whom I can tell everything,” Madelyn said when asked if she loves Chase.

What Happened To Carl Sutton In Outer Banks?

This time it was Madelyn’s birthday and Chase wasn’t short of positive words with a couple of exclusive pictures of Madelyn.

He posted a couple of pictures on his Instagram page with the following caption, “It’s quite rare to meet somebody and feel everything change. Thank you for making the coldest days warm, for your infectious love, and for being the best dog mom to Lil mi. Happy birthday sweet thang you make my heart warm and fuzzy 25/8.”

Chase commented on his relationship with Madelyn with Us Weekly.

“When season 1 of “Outer Banks” came to an end, our relationship started. And, at that time, we only had one worry: not to screw up the filming of the show. We were also super professional and our off-screen relationship didn’t get in the slightest way of our work. That is also one more thing that I am proud of,” Chase said.

Madelyn dedicated an Instagram post to their one-year anniversary with a picture of Chase and his dog, Milo.

“Thanks for helping me keep track of my belongings for a whole year (: adore u.”

Chase also didn’t miss the opportunity to celebrate their anniversary via social media and he also posted a picture of Madelyn, with the caption “365 w/ u <3.”

The entire “Outer Banks” cast appeared at MTV’s Movie & TV Awards. Madelyn and Chase received an award for ‘Best Kiss.’ They celebrated their award, as you might guess, with a passionate kiss after they accepted the award.

Everyone was mind blown when news emerged that Madelyn and Chase were no longer together, which was confirmed by a couple of their close friends.

“After trying to make it work for a couple of months, they decided that the best decision is to split up quietly,” a source told People.

However, with the 4th season of Outer Banks coming out soon, fans wonder whether there is chance for them to reunite after spending lots of time together on the set.