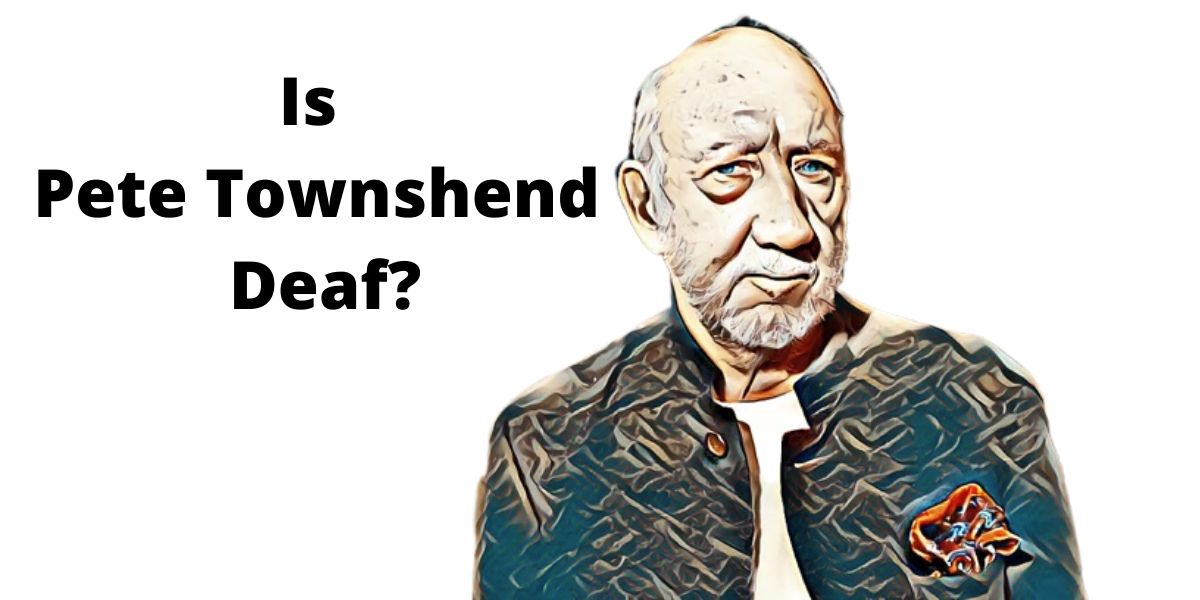 Peter Dennis Blandford Townshend is a songwriter, musician, and singer born in 1945.

He is a co-founder, guitarist, leader, and songwriter of the Who, one of the most recognized rock bands of the 60s and 70s.

The songwriter wrote more than 100 songs for the band’s studio albums.

These include rock staples like Who’s Next, the operas Quadrophenia and Tommy, concept albums, and many more.

He also wrote more than 100 songs that have been featured in his albums and television theme songs, and radio jingles.

Even though he loves playing the guitar, he is good at keyboards, harmonica, banjo, mandolin, accordion, ukulele, bass guitar, violin, and drums.

He taught himself how to play the instruments.

Despite his immense talents, many have always wondered whether he is deaf.

The instrumentalist suffers from tinnitus and partial deafness.

There are suggestions that his condition resulted from his extended exposure to deafening music.

The Who band was known to be loud during their live performances.

One such performance was the concert held in 1976 at the Charlton Athletic Football Club in London.

The concert is in the Guinness Book of Records for being the Loudest Concerts Ever.

The rock star dated his hearing loss to The Smothers Brothers Comedy Hour in 1967 when Keith Moon played his drum set.

The star provided the funds for establishing H.E.A.R. (Hearing Education and Awareness for Rockers), a non-profit hearing advocacy group.

When the band performed at the Super Bowl XLIV, he stated that he was worried the condition had developed to the point that he may be compelled to stop working with the band.

He revealed, “If my hearing is a problem, we’re not delaying shows.

I can’t see any way around the issue.”

He was taken to an audiologist who advised he use an ear monitor.

According to Him, the Condition Is Not That Bad

In 2011, Roger Daltrey confessed during an interview that the instrumentalist was experiencing a slow but serious hearing loss, and he resorted to saving the little that remained.

He stated, “Pete’s having terrible trouble with his hearing. He’s got worse problems with it…not tinnitus, it’s deterioration, and he’s seriously now worried about actually losing his hearing”.

Townshend later stated in his blog, “My hearing is better than ever because, after a feedback scare at the indigO2 in December 2008, I am taking good care of it.

I have computer systems in my studio that have helped me do my engineering work on the forthcoming Quadrophenia release. I have had assistance from younger forensic engineers and mastering engineers to help me clean up the high frequencies out of my range.

The same computer systems work wonderfully well on stage, proving perfect for me when the Who performed at the Super Bowl and did Quadrophenia for T.C.T. at the Royal Albert Hall in 2010.

I’m 66, I don’t have perfect hearing, and if I listen to loud music or go to gigs, I tend to get tinnitus”.

He Once Blamed Earphones for His Condition

In 2006, there was a story in which the rock star attributed his hearing loss to earphones instead of his time working in live concerts with The Who.

Many wondered what the basis of the claim was.

Even though he had talked about his condition, he never mentioned the earphones or their logic.

He was compelled to change the style of the music he composed and had to take more than 30-hour breaks, and this made him speak up.

He wrote on his website, “This very morning, after a night in the studio trying to crack a difficult song demo, I wake up realizing again—reminding myself, and feeling the need to remind the world—that my particular kind of damage was caused by using earphones in the recording studio, not playing loud on stage,”

He went on, “My ears are ringing loudly.

This rarely happens after a live show unless the Who plays a small club. This is a peculiar hazard of the recording studio.”