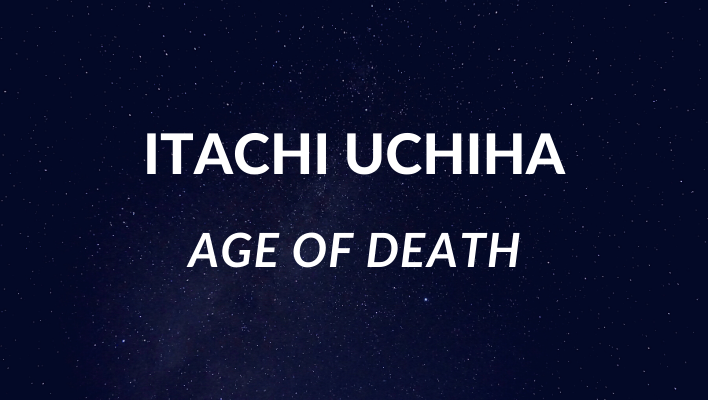 Itachi was such a tearjerker character in Naruto, a Japanese manga series written and illustrated by Masashi Kishimoto. His story was full of twists and turns, which took the audience on a rollercoaster ride along with it.  When the truth was revealed about Itachi’s death, his perception to many of the anime’s fans changed utterly. Some even perceived him as their favorite character in the entire series.  However, most of his fans are curious to know at what age Itachi died.

Itachi died when he was 21 years old in his fight with his younger brother Sasuke.

At eleven years, Itachi became an Anbu, and within six months of this, Shisui died.  He became an Anbu Captain at twelve, with disclosed promotion at thirteen due to Danzo’s request. Later on the next year, he spent the whole year researching his own clan’s plan and rebellion.

Although the Third Hokage was ready to negotiate with the Uchiha, Danzo recognized that no option could lead to Uchiha’s clan’s survival. He explained this to Itachi and left him a choice. He either supported the Uchiha’s coup and the whole clan to be killed, including Sasuke, or wipe out the entire clan himself before the coup started and saved his brother Sasuke. Itachi chose to spare his brother. Itachi was guilty of this decision but remembering his father’s words never to let others decide things for his life, he decided to take the path.

Itachi and Tobi slaughtered the entire clan in just one night, and Itachi decides to execute his parents in person.  However, they bore him no ill will but instead told him that they were proud of him and that he should take care of his brother Sasuke.

How did Itachi Die

Racked with grief, Itachi was convinced that Sasuke was the only person who could punish him for his crimes. In his first attempt to provoke Sasuke, he cast himself as the villain by allowing Sasuke to find him standing over their parent’s bodies. Sasuke fled, and Itachi went after him and encouraged him to do it, but he still passed out.  ,

Itachi died while fighting Sasuke, his younger brother, in a showdown. He was frail at the time and was not only immensely sick but was nearly blind. In chapter 401 by Tobi, it was said, “ Eaten up by disease and feeling his death approaching, he used medicine to prolong his life.”  He was prolonged to have one last final face-off with his brother as he wanted to lose his life at his brother’s hands. He had a respiratory disease since when he was eleven and had managed to live with the condition for another ten years.

Itachi died in episode 138 by the hand of his brother as he wished.

Where was Itachi Buried

There is no clear answer in the series to where Itachi’s body was buried. However, it is thought that Zetsu took the dead body of Itachi and stored it somewhere since the reanimation of Justus revived him. Zetsu is also believed to have eaten Uplatchi since it was the custom whenever an Akatsuki member died.

Was Itachi going to die anyway?

Yes, Itachi could still have died in the series, but all he wanted was to be killed by his younger brother, and that was why he took medicine to prolong his life. He wanted to face his brother and then die.

Right from a young age, Sasuke is calm and insightful, showing maturity for his age and knowledge to deal with situations. Despite his fame, talent and accomplishments, he was a humble man, never underestimating others nor arrogant about his abilities.

Itachi was a genius of such talent and consistently showed prowess well-beyond his years. He effortlessly learned Jutsu from simple observation and kept on continually rising in ninja ranks.  Itachi’s prowess rivaled Shisui, who was the strongest Uchiha at the time.