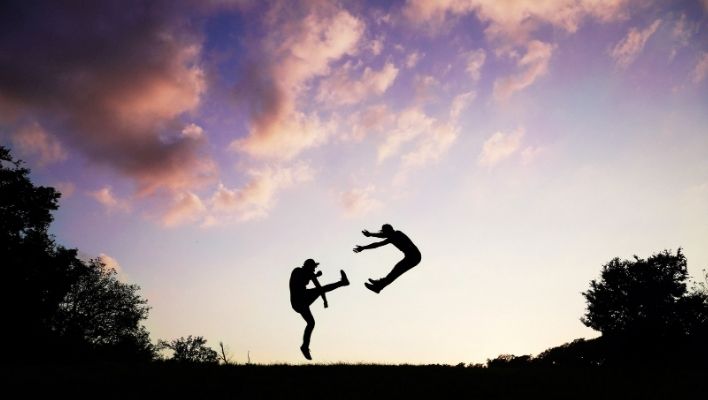 Keanu Reeves has had a pretty long career as an action star. His rise to fame for his action-heavy roles in movies like the John Wick series and the Matrix series has caused new fans to wonder if he can fight, or if this is all just an act. After all, actors often have stunt doubles doing all of the dangerous work for them.

You would be pleasantly surprised (yet unsurprised) to find out that Reeves, the multi-talented, versatile actor, does know martial arts. Reeves has, even before his acting career, had a sporty background. He was a hockey goalie during his school years and quite a successful one at that.

As of now, the actor knows Karate a well as various other forms of martial arts. Reeves has also had to actively practice numerous kinds of martial arts before the filming of action movie scenes. Even though he is in his mid-fifties (and he definitely does not look his age), Keanu still opts to do his own stunts, a recent example being his 2019 movie John Wick: Chapter 3 – Parabellum.

His Stunts for The Matrix Series

For the movie The Matrix, the cast had to do their own fighting scenes. For that, each actor had to go through three whole months of martial arts training with martial arts choreographer Yuen Woo-Ping which was highly intensive, to say the least. The reason behind this was that the Wachowski siblings wanted to be able to change the fight sequences around as they filmed. That is why the cast was required to learn various kinds of martial arts.

The Matrix is a trilogy that consists of three parts, i.e., The Matrix which came out in 2000, The Matrix Reloaded (2003), and the final one being The Matrix Revolution (2003). Keanu Reeves played the protagonist in all three movies. The plot constituted a computer hacker by the name of Neo who has to attempt to free other humans from a virtual reality system known as “The Matrix” that imprisons people.

The movie had a lot of elaborately planned fighting scenes, hence the need for Keanu to hone his martial arts skills. While he did have a stunt double in the trilogy, stuntman and director Chad Stahelski claimed that Keanu Reeves still did a majority of the stunts himself.

The John Wick Series: Stunts with a Bit of Movie

Funnily enough, the same stuntman for The Matrix series later went on to direct Reeves’ second-most popular series, the John Wick series (also a trilogy). In the trilogy, the multi-talented actor did a majority of his own stunts.

John Wick’s plot consists of an assassin raised by the Tarasov Russian Mafia who goes on a violent rampage to find the people who broke into his house and killed his beloved pet dog, Daisy. As expected, this movie has a lot of fighting scenes – though some fans even go so far as to say that the whole movie series is one huge fighting sequence. Keanu had to intensively train for them as he went on and did ninety percent of the stunts throughout the entire series.

Also, according to his own directors and producers, Reeves happens to do ninety-eight percent of the fighting scenes himself. The remaining two percent has to be left out only since the insurance policy does not allow it.

As opposed to learning a large variety of martial arts, Reeves’ training focused more on Aikido which is more of a self-defense method rather than an offensive one. Keanu also had to train with weapons and figure out how to fight with guns and knives when in combat. The fights in the film franchise are heavy on realism, but they are also thought out considering the stylistic demands of filmmaking in mind. To improve his fighting skills, Reeves also opted to learn a lot of Brazilian Jiu-Jitsu fighting moves.

Keanu Reeves happens to be a white belt holder. He earned the belt when getting his training in Brazilian martial arts some years back. Now, after rigorous practice and stardom, he has also earned the infamous Judo black belt. The actor is constantly levelling up in all aspects of acting and his fans appreciate that about him.