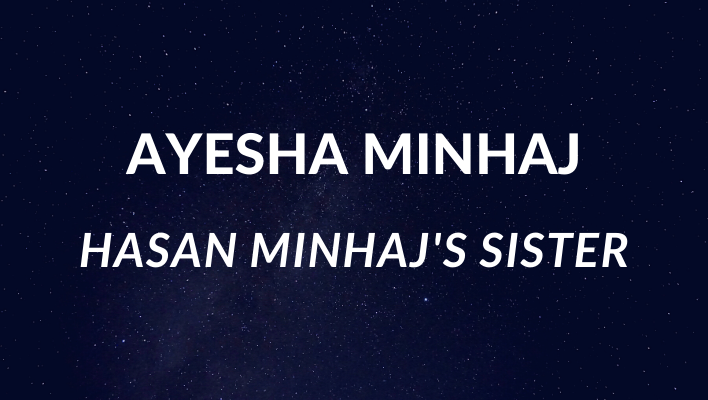 When you first hear the name Minhaj, you probably think of all the comedy shows and events that have been hosted by the comedian Hasan Minhaj. He has gained his fame through hard work and continuous success, landing him two shows on Netflix. But did you know that he had a sister?

Yes, her name is Ayesha Minhaj. I am fairly sure you knew that from Hasan’s comedy shows and social media. Hasan has used his sister’s name in stories about his family on and off over the years. He has also shown a lot of love on his social media for Ayesha Minhaj. We all know that once a person gets famous, so do the people around them. That is what brought Ayesha into the limelight.

Hasan’s mother went back to India after he was born in Davis, California, to finish her medical degree. Unfortunately, she was not able to come back to the United States because of immigration laws. Hasan’s father travelled back and forth from the United States to his wife in India. During this period, Ayesha Minhaj was conceived.

Hasan was not aware of the fact that he had a sister until he finally met her when he was 12 years old, and Ayesha was 8. That is when she came to the United States with her mom. Since then, she has stayed in the United States. Hasan makes quite a few jokes about how he met his sister, which is truly a funny and surprisingly real incident.

Ayesha has been in the United States from when she was only 8. She completed high school and went to the University of California. Ayesha completed her bachelor’s in political science in 2010. After a couple of years of working, she went back to college to get a Juris Doctorate from the University of Pennsylvania Law School. She graduated in 2015.

After completing almost three and a half years, she got a job at none other than Google in their Security Counsel as an associate. To date, she continues to work there, growing and moving in the direction of a bright career.

Most of her fame and popularity came through her relationship with Hasan Minhaj and his following on multiple platforms. However, she has already been making a name for herself in the lawyer community.

Skadden, Arps, Slate, Meagher & Flom LLP and Affiliates made Ayesha a Litigation Associate very fast. Not only has she performed great in that role, but that truly shows how passionate she is about her work as a lawyer.

Ayesha has been highly successful in her career. That means she has made a decent amount of earnings for herself and will continue to do so. Now, what you really want to know is how much this comedian’s sister makes. Well, according to some reliable and authentic sources, Ayesha Minhaj has a net worth of $300,000.

Some may think that it is not as much as they expected, but then again, she probably just got done with her student loan. So, if you consider all of that, then she did a fairly good job. But the point to focus on is her growth and future. She has two degrees in two different fields. Ayesha will surely take complete advantage of her education and make a fortune out of it.

Unlike her brother, Hasan Minhaj, Ayesha has made it a point to keep her personal life private and away from all the cameras. She tries to stay clear of all sorts of paparazzi. All we could find out is that she tends to stay focused on her career and puts that above most other things. She also visits her family over the holidays and often shares pictures with them on her social media.

Having a Famous Brother

Some people believe it is hard to live with a famous brother but Ayesha seems to be very pleased with him, particularly with how he handles himself and his image on the internet. He also seems to be a dedicated family man, which is a great plus.

It is not easy to get a following of 4,000 people on Instagram but Ayesha Minhaj has successfully done that. She uses that platform to share her memories, travel pictures, and quality time with her family.

Ayesha Minhaj seems to be a very dedicated and passionate individual who loves her family. She clearly has a very bright future ahead of her and is not in the least overshadowed by her equally successful brother.