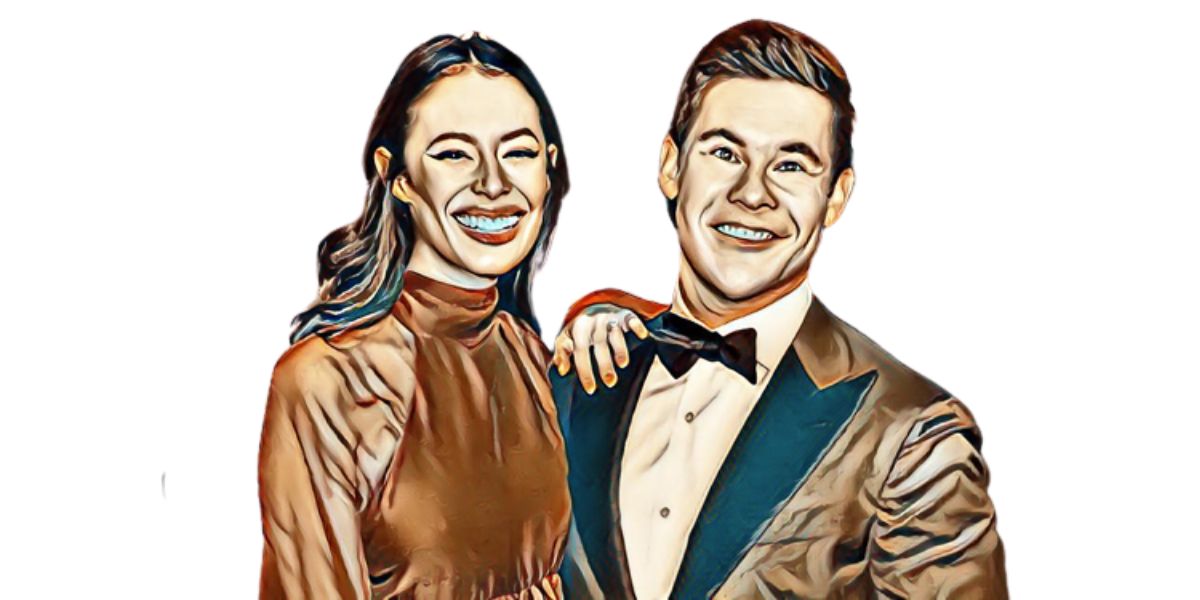 Comedian and actor Adam Devine is famous for his starring role in The Righteous Gemstones, a series that concentrates on a famous televangelist family and their greed, charitable engagements, and deviance.

Also, the star recently took an additional step with his long-time girlfriend, Chloe Bridges, when they tied the knot.

Chloe Bridges is an actress who has been in the public domain for a while.

She started her career acting in the Freddie Prinze Jr. show, Freddie as Zoey.

She proceeded to act as Dana in the movies Camp Rock and Camp Rock 2: The Final Jam.

She also had starring roles in various sitcoms like Suburgatory, New Girl, and 90210.

This was before landing a recurring role in The Carrie Diaries as Donnal LaDonna.

The actress has appeared in various projects in recurring roles.

They include Pretty Little Liars, Insatiable, and Daytime Divas.

The two met in 2014 when they were filming The Final Girls.

They started dating, and the media spotted them in different places together.

They worked on Mike and Dave Need Wedding Dates.

They do not hide their time together since they post images of their date nights on social media.

Adam revealed that he had asked Bridges for her hand in marriage and waited a few days before announcing the news on Instagram.

In the post, the actor stated that he supported the idea of her future wife taking over the planning process.

In the post, he wrote, “Have fun planning the wedding.

I’ll be there for the cake tasting.

You are my best friend, and I’m thrilled you want to get old and wrinkly with me! You’ll be less wrinkly. I’m gonna look like a Saint Bernard.”

At the time, the actress confirmed the news on her social media page.

She stated, “I’ve known we had a special connection since we first met (well FIRST I liked the way his butt looked in his jeans and the way he made me laugh and the fact that his backpack was monogrammed which seemed VERY adult to me five years ago) and I quickly learned that he is the kindest, funniest, most incredible man I’ve ever met.”

The couple tied the knot in Cabo San Lucas, Mexico.

Initially, the two were supposed to tie the knot in a ceremony in late 2021 at Orange County’s Resort at Pelican Hill, but the venue postponed the year’s events due to the pandemic.

This compelled them to choose the Esperanza resort in Cabo San Lucas.

They hired Elena Damy to help with planning.

Chloe revealed, “Elena and her team were a godsend. They are always so positive and really made us feel like everything was going to work out,”

His costar, Erik Griffin, shared the announcement with a photograph alongside Blake Anderson and Anders Holm on Instagram.

“Dem Boyz! Devine is off the market! Such an awesome wedding!” Erik captioned the image.

Griffin was in a suit.

Adam Ray also shared a picture of the wedding on his Instagram.

“All the love. All the laughs. CONGRATS Chloe & Adam,” Adam stated, adding a heart emoji.

She teased about the gowns she tried on before her wedding.

She had tried a couple of dresses before choosing what she and many considered the perfect gown.

She also confessed that things were not perfect during the planning stage due to the pandemic though the actress was excited.

Looking at the Instagram posts, it is easy to tell that they were meant for each other.